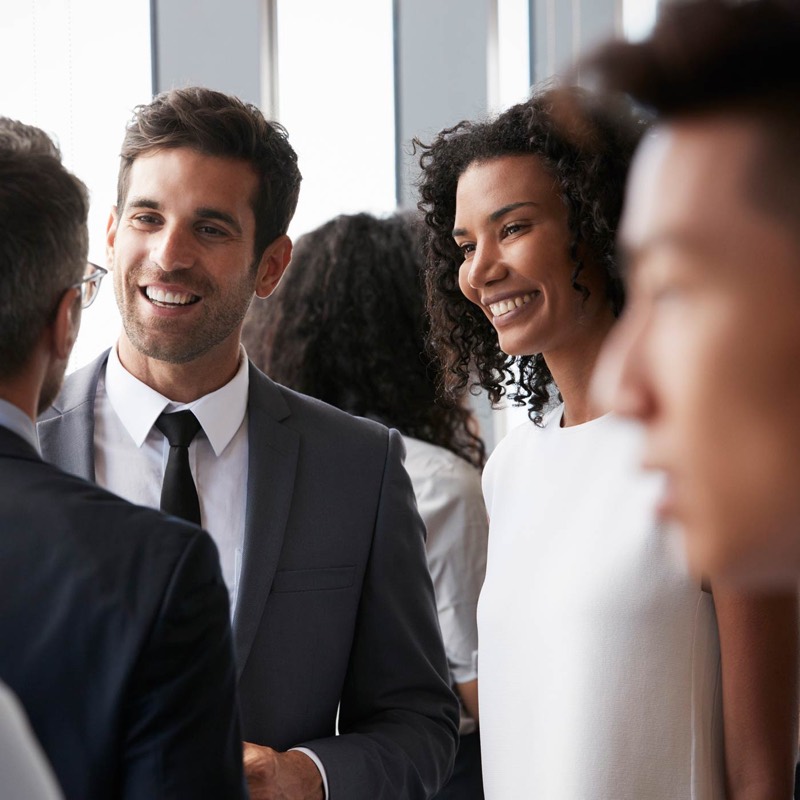 As someone wise once said regarding the best way to get ahead in life: “It’s not what you know, but who you know.” And the way we get to know most people is by some form of networking.

Sure, maybe it’s not stressing us out as much as the idea of public speaking, but it’s up there somewhere between hang gliding over an active volcano and synchronized skinny dipping with deadly squads of Humboldt squid.

But instead of thinking about networking as some kind of punishment the cold and uncaring universe designed to make us suffer for some unanswered-for transgression, we can try reframing it.

Don’t think of networking as the pushy process of trying to get the unwilling to buy something they don’t want (which makes it easy to take rejection personally when that something you’re trying to sell is yourself). Think about networking as just a way of making new friends, and think about this article as just five brilliant basics for stress-free networking.

Brilliant Networking Basic #1: Be Prepared by Knowing What to Say

Both Boy Scouts and special ops have it right with living life by a mindset that covers pretty much any possible contingency: “Be prepared.”

You don’t have to be a card-carrying member of The Networking Club with exclusive network access to the networkingest networking events ever networked. Networking can happen anywhere at any time: in the Airport United Lounge, at the Ritz bar, in the Whole Foods coffee line, or on the way to the friggin’ ballet. So be prepared.

Upon meeting someone new, the conversation will almost always include some variation of this phrase: “So what do you do for a living?” And as much as it looks like the easiest of questions to answer when reading it here from the comfort of your smartphone, it can actually be jarring in person. You might stutter your way through it in a way that leaves not only how you make your livelihood a mystery, but create added suspicion around the very state of your sanity.

The solution: know what you’re saying in response to the basic questions. You probably know what these questions are already, but if not, here are a few you’ll need to have quick answers to:

I always find a way to take the question, answer it quickly, and turn it around on them. For example:

“I’m Jordan. I help people learn to network and create personal and professional connections. What brings you to this event?”As basic as this reply sounds, it serves its purpose. It doesn’t take a genius to see how I shifted the focus of the conversation in order to show that I 1) listened to them and 2) turned around to focus on them.

This doesn’t require years of improv drills or a smooth sense of savior-faire, just a few moments of practice turning conversations around to focus on the other person and put the ball back in their court to keep the interaction moving forward.

Nobody likes feeling like a commodity. And, even if you find yourself at some sweater-vest infested ‘networking event’ that exists solely to facilitate the collection of new network connections, it’ll serve you best if you keep in mind the reframing from above: think about the process of networking simply as a way of making new friends.

Be a friend first and the rest will follow. If you take the initiative to introduce yourself at a gathering, often you’re the hero of the moment. You’ve taken the pressure off of the other people there who — most likely — are just as nervous about the idea of throwing themselves into the networking pool as you might be. And when the idea crosses your mind to introduce yourself to someone new (or a group of new someones), don’t wait to lose your nerve by dipping your toe in the water to see if it’s warm: walk up to anyone, introduce yourself competently — it can be as short and simple as what I mentioned above: “I’m Jordan. I help people learn to network and create personal and professional connections. What brings you to this event?” It literally always works.

No one will hold an awkward interaction against you. Remember that they probably won’t even remember you five minutes from now. Most people you meet have less than spectacular short-term memory.

Don’t let the heading fool you. When you do make it into a worthwhile conversation that just might lead to a friendship or at least a mild connection, it’s easy to get so caught up in worrying about what you’re going to say next that you get distracted from what’s currently being said. The trick here is easy: listen. Listen by responding to them point by point. Paraphrase back to them what they said as a practice. It’s an art form worthy of your time. It’s how people remember and like you. When you listen, it’s always easier to find what to say next when you are not thinking about what to say next.

This also takes the pressure off of you because you’re just following the other person’s lead, and it allows you to ask questions and really get to know the person in front of you instead of stressing out about what you’re going to share about yourself.

We all know that most people love talking about their big plans, dreams, and what they are proud of when you listen and make them feel comfortable, and it’s the easiest thing in the world to hook them if you listen. With practice, you will retain what they’ve told you, and this can guide your conversations into some incredible relationships.

Now that you’re a regular networking maverick from this nearly 1,500-word article, you probably know how to follow up. Let me give you a few pointers on what I do.

Step 1: As soon as you get home, or in your Uber back to your place, add new contacts to your calendar so you can reach out to them with a quick text later in the week. Invite them out with friends if you’re in town, or text them something that reminded you of your last conversation. It’s super rare that people do this, and it’s the 20 percent that makes the other 80 percent of the relationship start off beautifully.

Step 2: Try to introduce that person to anyone who you think would be of benefit to them by using the double opt-in intro outlined below. If you can’t think of anyone, turn them on to a good restaurant or new something. You get more points if it’s something related to what they talked with you about when you first met.

A cold introduction between two people in your network might backfire for a variety of reasons. It’s possible they’re already famously great friends — and some might read the fact you didn’t know this as a sign you’re out of touch or not as connected in that circle as you thought you were. It’s equally possible they’re already famously feuding enemies, in which case the same assessment about your lack of connection in that circle applies. Or maybe one party already has someone in their network who takes care of the particular need you’re trying to help them cover and they like to keep their contact list as trim as possible — in which case an undesired introduction runs the risk of embarrassing everyone involved and marks you as its unwitting catalyst.

But the double opt-in introduction is a great way to avoid such pitfalls by giving each party veto power over the connection without the risk of offending either. Here’s how it works:

First, send an email to the first party telling them you know someone you think they should meet. For example:

“Hey, Barbara! In our last conversation, you mentioned you were curious about investing in cryptocurrencies. I know the tax implications can be tricky; if you’d like an introduction to Joe Ravioli, a knowledgeable CPA friend of mine who specializes in this sort of thing, please let me know.”

Then, if the first party responds in the affirmative, you send an email to the second party. Something like:

“Hey, Joe! I know you’re an expert in current tax laws around cryptocurrency. My friend Barbara Eggplant is curious about investing; if you’d like an introduction, please let me know!”

The double opt-in signals professionalism and respect for the time of everyone involved by giving each party the option to bow out without the risk of embarrassment.

Connections, once made, need to be maintained. Contact management software like Contactually can be helpful toward this. It’s marketed toward realtors, but helpful for anyone maintaining a network — and this should be you!

Harvey Mackay’s brilliantly titled book Dig Your Well Before You’re Thirsty conveys the idea almost without need for explanation, but here goes: be of use to your network before you need the network to be of use to you. In other words, look for opportunities to give selflessly to your connections — really just a fancy word for friends at this point — before you even think of asking for anything in return.

There are countless ways to do this. If one of your connections is interested in astronomy and another connection curates a planetarium, offer to make an introduction. If you bond with someone in your local network over a favorite band that’s coming to town, invite them for a night out and buy their ticket.

Don’t keep score, because nobody owes you anything in return when you truly give selflessly. In truth, your network will start reciprocating this effort before you even have to ask. If you’re thoughtful, you’ll be thought of.

Just because networking is essential to your success doesn’t mean it has to stress you out. By reframing the process as an exercise in extending the hand of friendship to others who share common interests rather than scheming to secure business leads, you’ll be an expert in making solid connections under any circumstance in no time.

Prepare. Interact. Listen. Follow up. Offer value and be of use to your network’s needs before you have need of your network. Oh, and never, ever, ever open a cold dialogue between people in your network without employing the double opt-in intro unless you want to needlessly risk the ire of everyone involved! Remember these basics and you’ll be fine.